ReD Associates is a consulting firm known for its strength in corporate innovation strategies. Their mission for world-renowned corporate clients such as Adidas, Samsung and Pernod Ricard is to capture the signs of new business that are not yet apparent.

The company’s projects are not based on traditional business consulting frameworks but on anthropology, philosophy, sociology, and others—moving forward through a collaboration of a highly professional staff. The company recruits its employees from universities around the world, provides five years of training, and brings them up as partners of their own clients.

“If you haven’t read thousands of books, and can’t discuss Heidegger and Lichtenstein, then you can’t work here,”says company Director Mikkel B. Rasmussen.“You need a much higher education level than an MBA.”

The decision on a project is made through a five-step process called sensemaking: Framing (going to the location and asking basic questions to gain an understanding of the situation), Data Research (collecting data using techniques such as ethnology), Whole Value (classifying the data using careful logic), Strategy (applying the idea that emerges from the first three processes), and Anchoring (permeating the strategy or idea within the client).

Its features are evident from the first step, Framing. They enter with what they call the “beginner’s mind,” wanting to have no prejudice at all. This can be seen as completely opposite to the approach taught in MBA courses, in which a hypothesis is built up and then tested. The enter by incorporating many of the social sciences, because they say it is a company engaged in the science of people. Their role is in helping the client to understand human behavior. Their thinking is that prejudice is a distraction that obscures the true nature of people.

For example, Adidas came to ReD to get help growing their running shoe business.If it had been a normal consulting firm, they might have begin with an investigation of why market share was falling, but it was different for ReD Associates. Rather, they asked things such as, “What has the company been doing up to now?” and “What are the competitors doing?” and “What related technologies are there?” and began to collect data in a new way. When they had the data collected, they didn’t think, “Why has market share fallen?” but rather, “Why are people running away?”

In an historical building, various experts work on cutting-edge innovation.The work area uses the “hot desk” system, where each person can choose a desk. The desks and chairs were designed by employees.
http://www.redassociates.com/

A variety of publications are found in the library, covering many genres including management, sociology and design.

After graduating from Maastricht University, he gained his master’s degrees in public administration and economics from Roskilde University. He took part in the establishment of Mind Lab, and founded ReD Associates in 2005 with three other partners.

The company shows its strength in particular in the Whole Value step. Data brought back from the field is sorted, and the people met in the field are all introduced to each other. Through this they search for the pattern that will tie to the final idea. A deep perception is needed to deal with a huge amount of data, and that is the reason why highly cultivated staff are required.

At least one employee of the client company must join in the project. A project team must also be established within the client company, of which one person must be from top management. One person with authority over the entire project must be put in place, so that there can be smooth resolution to the sometimes confusing world of challenging ideas.

A view from the entrance. The rhythm of light and darkness makes a kind of nostalgic air. Inspired by such an atmosphere, the consultants do creative and distinctive work.

A view from the entrance. The rhythm of light and darkness makes a kind of nostalgic air. Inspired by such an atmosphere, the consultants do creative and distinctive work.

The company’s office is in an old building, built in the 1800s. “It’s really interesting as a concept that completely new innovations can come from an old building,” Mr. Rasmussen says.

What immediately draws the eye in the office is the many workshop spaces, where discussions can be easily carried out. Walls and desks where people can write as discussions are carried help to inspire the staff. The kitchen and cafeteria are also places where the staff can very easily enter into discussions.

For the benefit of staff members who will be out on business trips some 150 days each year, two lodging facilities have been provided, which further promote interchange between employees. A number of small rooms are also available, but these are open workspaces where people can join in another’s activities. There are no individual desks here, but when the work is over people clear up their belongings and move to another place.

The office is also a stimulating place for clients, and acts as a tool for developing new viewpoints and new thinking. For this reason, all clients are invited to the office. This is contrary to the pattern with traditional business consultants. If the consultant and the client are in the same culture, it’s not possible for different ideas to be developed. “If the client feels the office is something like a foreign culture, then it’s necessary to continue being a consultant,” Mr. Rasmussen says. “We design rooms to function in just that way.” Even more than a talented staff, this space becomes the ground from which the innovation to move famous global companies can bloom.

In a room used as a workshop, all the desks and walls can be used as whiteboards.

Toolbox in the workshop room. Used when developing ideas.

Lodging facilities in the office. Used by employees of the New York office during their stay. 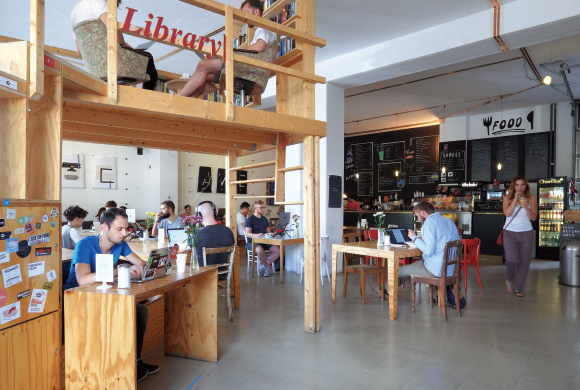 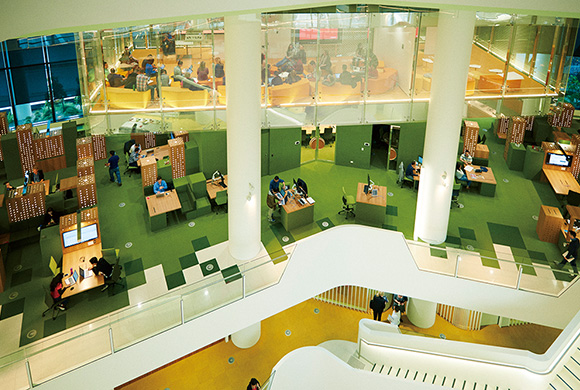 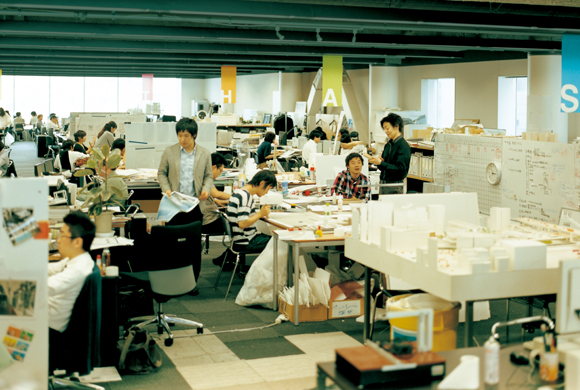