An office that can fuse the values of telecommunications employees and entrepreneurs Rock-solid as an organization; flexible to respond quickly to change. How did these two combine at the SingTel Centre to create the ideal group?

The stage for this change was the company’s digital division, SingTel Digital L!fe and their office,SingTel Comcenter. Within the body of the company is an intermingling with the employees of a number of acquired start-ups. But all employees must play their role as pioneers in new digital business areas.

SingTel’s hopes for the entrepreneurs is that they will create the new business that will support future profits. They have already launched new businesses including those related to e-business, mobile advertising, photo sharing and others.

SingTel sees the entrepreneurs as “foreign matter.” The difference between the two groups in decision making is striking. In SingTel’s traditional telecommunications business, the process from identifying a problem to resolving it tends to be linear. The entrepreneurs of the digital division, however, prefer a non-linear process. In short, there is no one decision-making process, and they don’t hesitate to shift directions in order to pursue an entirely new idea.

Normally, having these different decision-making processes in one office would make things extremely difficult. Michael Smith, Chief Commercial Officer, gives his feelings about this.

“For me as a person coming from a large-corporation background, the sort of zigzag process of decision-making wasn’t something that I instantly got used to,” he says. “But, to be able to create new business, I had to study their way of doing business. To change the kinds of people like me brought together within SingTel, we had to bring the entrepreneurs inside the corporation.”

To do that, however, they knew they needed a new office to receive the entrepreneurs. A work environment that the entrepreneurs would like would also have to be very different from that of a normal large corporation. The necessary key points, Mr. Smith says, were interaction, collaboration, sharing, openness and the ability to change quickly. The current office was designed to embody precisely these values.

Theater near the entrance area. The company services are presented to clients here. Also, activated by bio-metric recognition, messages for employees arriving at work can be displayed here.

The interior of the Comcentre features non-territorial seating. Everyone chooses the place where they want to sit. The idea is that you might just start talking to whoever the person is sitting next to you some day and get the hint that changes the direction of business.

Along with this, the desks have a wide range of functions that ensure employees’ autonomy while also increasing the speed of business.

For example, the deep and wide boomerang desks allow for materials to be spread out, letting employees really focus on the work at hand. On the other hand, the standing desks, which allow employees to stand while working, are better for short periods of concentration. Employees carry on their daily work using the right desk to fit the style of business being done.

However, it’s a bit rash to think that just because there is an open desk system that immediate interactions will happen. There are a certain number of employees who want to work under the same conditions every day, and there are others who do not think of interaction as something important. There are also examples from the past of employees leaving personal belongings in a desk and insisting that, “This is my desk.”

This shows that although the entrepreneurs should lead through their power to change the organization, there still is a limit to their influence. It requires a number of leaders to take the initiative to carry out the measures laid out by the company.

“I actually like doing work at a fixed place,” Mr. Smith says, but adds that as much as possible he actively moves his seat and tries to engage in communication with the people around him. Also, there is a reminder posted every two weeks that, if things aren’t moved from specific desks that evening, the personal property will be gathered up. If even then the employee does not move, the company will go ahead with a removal of the items.

The company has also successfully built showrooms and laboratories within the office to display the things entrepreneurs are working on. This provides a visualization of how they do their work, and serves as continuing education for the employees of SingTel Comcentre.

It has been four months since the staff moved into the new office. Apart from those employees whose work requires a closed business environment, such as finance or HR, about half of all employees now have a favorable view the movement of seating locations. There is a sense that there is a positive influence and reaction for both individuals and the company through this new work style. One is a change in the sense of speed. Previously in SingTel, the large corporate scale resulted in a single decision-making style that affected many people, and meant that the company moved in a ponderous way.

“But with the entrepreneurs, a new idea that they came up with at nine in the morning could be put into effect by one that afternoon,” Mr. Smith says. “By working in the same space with them, the SingTel people began to learn a lot from them about speed.”

One more change came in the way in which resources are allocated. Previously in the telecommunications business, one project might involve the use of US$6 million over a six-month period. For the entrepreneurs, Mr. Smith says, “It might be that they work off an idea scribbled on a napkin, and finish up with a budget of $600 over six days.” It’s part of the small business goal of working fast and inexpensively. For failure, too, the concept is Fail Fast, Fail Cheap, and then find more ways of improving the idea.

“That’s something we can really learn from them,” Mr. Smith says. “The secret to the digital business is two things: discovery and delivery,” he continues. “Delivery is the area that is the strength of the traditional telecommunications business. The ability to invest huge amounts of financial resources, and with little effort provide a huge volume of service. Discovery is the forte of the entrepreneurs, and that’s what we ask of them. In other words, innovation. Their work style of Fail Fast, Fail Cheap will bring us innovation.” 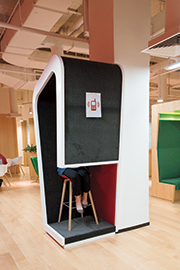 Phone booth. The use of sound-absorbing materials means the voice of those using the phone doesn’t leak into the office.

A theater-type meeting area in the central part of the office. Sharing of information between large numbers of people is possible. 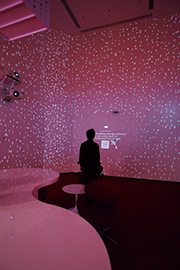 Gallery of interactive art installed in the entrance. Data related to the words expressed by the company are ambiguously displayed here. This is also a good PR effort for visitors.

The kitchen and locker area, just off the theater.

The kitchen countertop extends into the gate, making for a sense of fun. 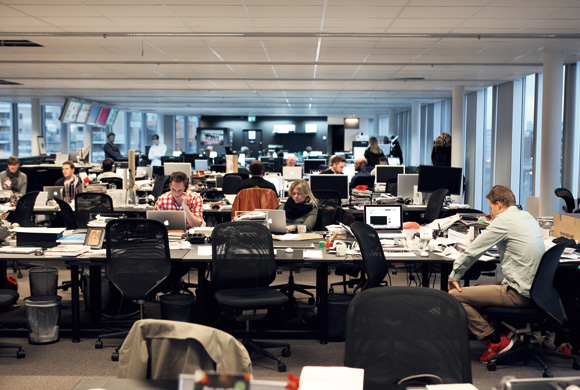 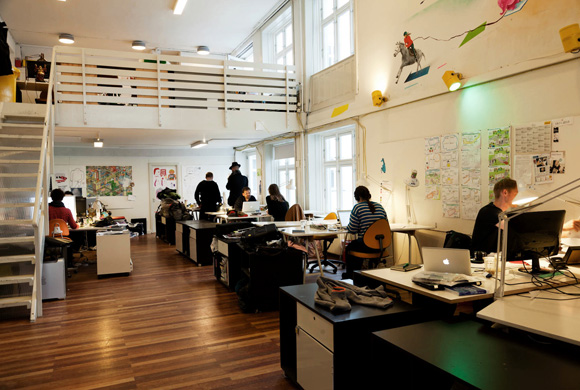 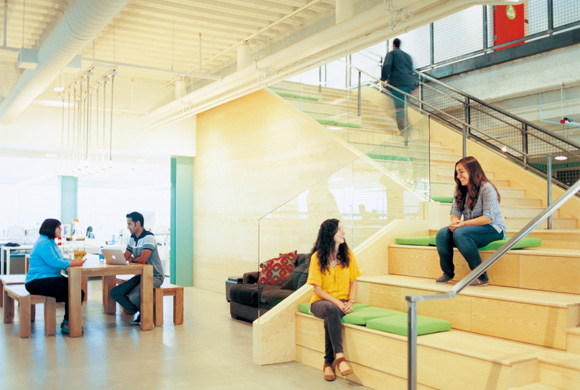 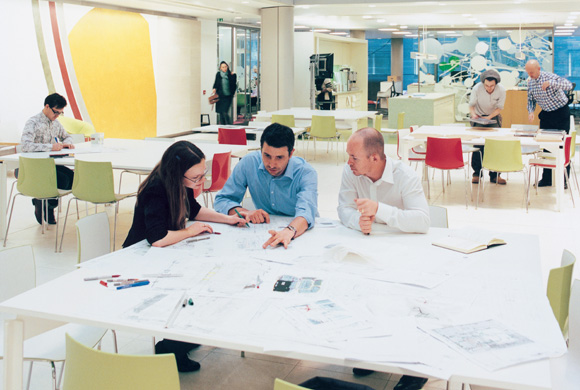