Located in Amsterdam, and made by the same developers and management companies, Edge Olympic Amsterdam and The Edge (page 81) are like siblings: The Edge is the original pioneer, while the younger Edge Olympic is at the forefront of the smart buildings industry.

The technology used in each has a lot in common. Control of lighting and air conditioning, conference room reservations, all are consolidated on an app. Building details, down to each coffee machine, are IoT enabled, and data is collected from all areas of both buildings. The app’s dashboard displays information such as the building’s energy consumption, CO2 emissions, noise and light levels. For example, pointing to a number on the dash- board that indicates projected employee productivity, Edge CTO Erik Ubles says, “Overall today, at the moment, it’s 94.4 percent.” Of course, the data is not absolute, but when building information is visible in this way, employees are likely to be more mindful of productivity. Unlike its older counterpart, the tenant-occupied Edge Olympic is in an existing building that was renovated to retrofit some of the smartest systems available. This demonstrates that smart is not exclusive to large corporations with limitless capital resources, but can be done with more modest budgets as well.

The building was developed by EDGE, which was previously known as OVG Real Estate. Edge Olympic attracted considerable attention right from the start. What does a building need to enhance the productivity, creativity, and happiness of its occupants? Many anticipated that the building would showcase the newest solutions to such questions. 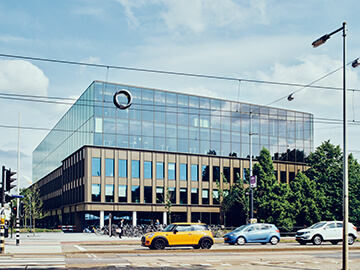 Exterior of Edge Olympic, located near the 1928 Amsterdam Olympic Stadium in a quiet area away from the busy city center. The two levels of wood- framed floors added atop the original building are clearly visible. 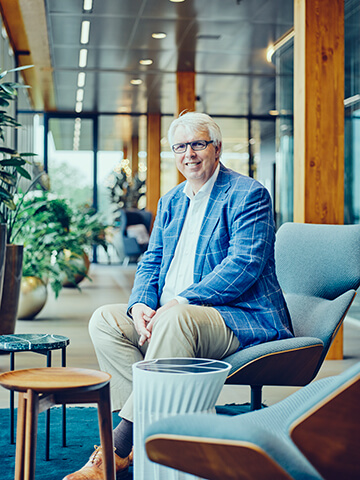 The results are now in. Instead of being a conventional space designed to control the behaviour of its occupants, Edge Olympic can anticipate and meet the needs of its occupants halfway. As Ubels explains, this is because it has cleared all four stages of becoming a true smart building.
The first stage is to implement data transparency. Edge Olympic achieves this through a dashboard that displays various data from all areas of the building, and by enabling users to adjust the room temperature, lighting, and other aspects of the environment through a proprietary app.

The second stage is to grasp how various data points connect to other data points. For example, knowing the details of a planned meeting with an important client could enhance the client’s experience by securing their access to the elevators in advance. Or one could discover what makes one conference room preferable over another for a variety of uses by looking at corresponding data. “Most people on the floor will know, that’s a bad meeting room because it’s always too warm, too noisy, too whatever… Why do people not change that? That’s strange. You’re in the building, you pay for it, and people seem to accept that. We want to change that,” Ubels says. When there’s no data transparency, it’s hard to find proof that a certain room is too hot or too noisy, which makes it difficult to identify problems and make improvements.

The third stage of a true smart building is to be aware of usage. How many people are using the room, and in what way? This may seem like a simple matter, but it can become complicated—for example, a sensor might flag a seat with someone’s bag on it as being empty, while a person can easily see that it is in fact occupied. At Edge Olympic, the system makes an informed decision through the use of thermographic cameras and sensors.

The fourth and final stage is machine learning, where data from the first three stages are consolidated to extract an algorithm. Edge Olympic is at this fourth stage. Like The Edge, the building’s system is served by sensors lining the ceilings and furniture, but with 10 different types of devices collecting all kinds of data from 65,000 sensors, Edge Olympic has more than twice as many devices as its predecessor. The collected data is then used to perform a simulation on a digital twin in a virtual space, and finally, the feedback is projected back into the real world. In this way, the building can autonomously guide itself toward optimizing employee activity, energy use, maintenance, cleaning, and so forth. In other words, the building learns how to cater to the needs of its occupants in real time, and has the intelligence to execute those changes. This is what makes Edge Olympic one of the world’s smartest buildings, and the reason why there are numerous “Edge” brand projects in progress around the world. The day that The Edge becomes synonymous with the concept of smart buildings itself might not be so far into the future. 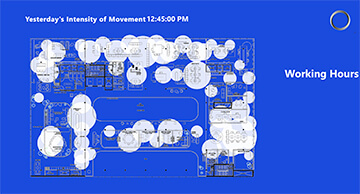 Data showing how many employees used which spaces within a given timeframe, making more and less utilized areas instantly visible.