Sankt Oberholz, a long-established coworking space in Berlin, and a pioneer of spaces providing free Wi-Fi, was founded in 2005.

Founder Ansgar Oberholz says that originally he wanted to create a coworking space unlike today’s spaces. “I was 32 years old at that time,” he says, “and at the time my goal was to build a restaurant by the time I was 50. It was then that I was introduced to the building that would become the first St. Oberholz.”

It is an old, historic building that is very familiar to residents. Many shops, such as hamburger restaurants, set up here, failed, and the next came in. With more than 200 square meters of space, the property is quite large for a café, and while Mr. Oberholz felt at first that signing a contract would be too risky, but when he suddenly received an introduction he felt that the space was in fact attractive. “I felt that there was great potential in the building,” he says. “And, to take advantage of the old building, I wanted to do something more than just a café.”

“The first concept was a café where you can work,” Mr. Oberholz continues. “Although others around us said it wouldn’t work well, the place soon became known in Berlin as the café where you can use Wi-Fi, and as the café where you can do other things than just enjoy coffee.” The space features large and small tables, chairs, sofas, and a variety of spaces, with power outlets available throughout the building. Although it was rare at the time, Mr. Oberholz created a space where it was OK to open your laptop, as a location that carefully considered the people who use the café for work. This was the beginning of the first St Oberholz.

At the time, however, the concept of the coworking space did not exist. Mr. Oberholz adds that in fact he was not thinking about this concept at the beginning. “I’m an entrepreneur,” he says. “At first, I knew I didn’t want to just create a simple café. I was thinking about making something happen by using the café as a platform.” 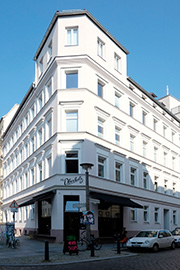 Exterior view of the first St. Oberholz location, which maintained the original atmosphere of the building. 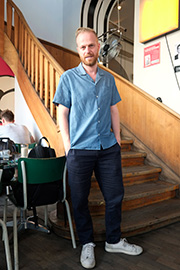 Mr. Oberholz says that the community of customers, and the inspiration available from the surroundings, will help to further develop St. Oberholz. “It has developed gradually through feedback such as that a printer is needed, or that people want specialty coffee,” he says. We always try to be one step ahead of the community. At the same, we don’t want to stress users by offering too many new things; even if you’re moving ahead, you don’t want to leave users behind. I think that this attitude is very important.” St. Oberholz also learned from the emergence of today’s coworking spaces. The decisive factor is the voice of the community saying, “We want to work here!”

Why was a “coworking space,” something that had not previously existed in Berlin, accepted? It involves the history of Berlin itself. “Until the Berlin Wall collapsed in 1989, Berlin was an isolated island in the midst of a socialist country,” Mr. Oberholz says. “There was no business model, and even if there were creative people they didn’t have money. But that city became today’s place of technology and the digital. It has an exciting creative scene and we created a business model connected with art and music. Many major German firms have labs or innovation hubs in the area. This kind of situation matches the coworking space model.”

But, he adds, “I really don’t believe a lot of what I said about Berlin. The era of the emperor, of the Nazis…. About five times in the past 100 years Berlin has undergone changes coming on a national scale. I don’t think that there are many other cities that have changed so often. So, in 10 years, Berlin might be a completely different city from today. But, at the same time, since Berlin has also repeated major failures, we can also look at the entire city as a startup.”

Because the city is like a startup, attractive startup companies also gather here. A creative city attracts people. However, in recent years urban redevelopment has begun that is intended to raise the level of the entire city. “This is dangerous,” Mr. Oberholz says. “Unregistered clubs, which have been a source of creativity, are being destroyed. I accept those illegal places because in a sense their culture is like that of Berlin. Will these cultures change during the process of urban development? That’s what I meant when I said that the city might change in 10 years. Even if redevelopment of the central part of Berlin is inevitable, shouldn’t we leave the very ‘Berlin-like’ outer parts of the city alone?”

As it grew by listening to the voice of the community and responding to the changes in coworking spaces, St. Oberholz continued to grow and, 11 years after opening its first location, opened a second. Also, at the request of companies, it also offers consulting services.

“We now have many consultations on things such as companies wanting to incorporate elements of coworking spaces, or about learning from startups,” Mr. Oberholz says. They also launched a project called The Institute of New Work, which includes activities to think about issues around automation, digitalization and the changes in work.

St. Oberholz has given birth to many startups, such as SoundCloud and HelloFresh, but what will happen over the next decade? I think that this change will be a great deal of fun.

Exterior of second location. The exterior is like an open café.

Designs throughout the building give a feel for its history. 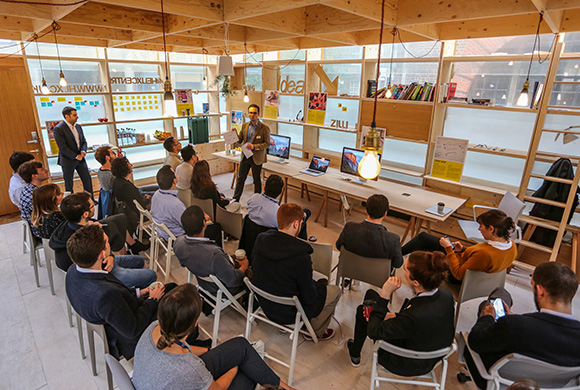 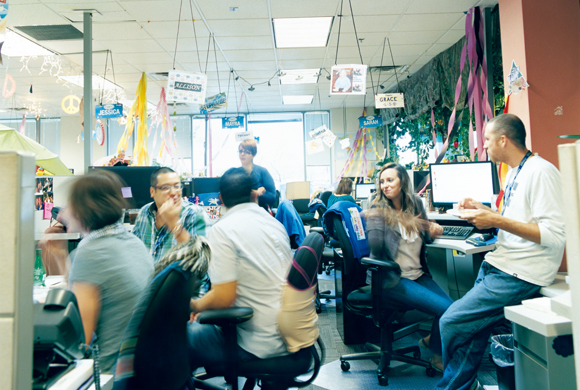 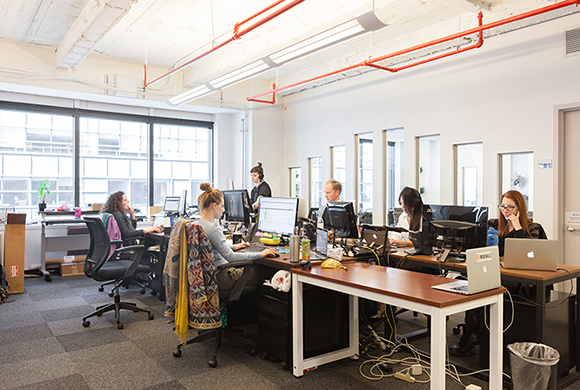 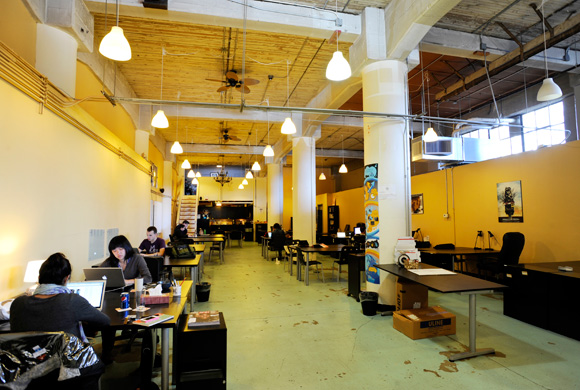